The Archaeology of Israel: Constructing the Past, Interpreting the Present

Since 1990, the Berman Center has published eight volumes, seven of which appear in the Center's series New Perspectives on Jewish Studies, published by New York University Press. The eighth volume, The Archaeology of Israel: Constructing the Past, Interpeting the Present, was published by Sheffield Academic Press in 1996. The series provides a theoretically informed, interdisciplinary discussion of a basic dimension of the field of Jewish studies. 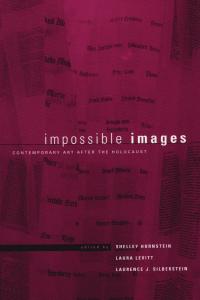 The most recent volume in the series, Impossible Images: Contemporary Art after the Holocaust, was published in the summer of 2003. Edited by Shelley Hornstein, Laura Levitt, and Larry Silberstein, the volume brings together a distinguished group of contributors, including artists, photographers, cultural critics, and historians, to analyze the ways in which the Holocaust has been represented in and through art, photographs, museums, and monuments. Exploring frequently neglected aspects of contemporary art after the Holocaust, it demonstrates how visual culture informs Jewish memory and makes clear that art matters in contemporary Jewish studies. Accepting that knowledge is culturally constructed, Impossible Images makes explicit the ways in which context matters. It shows how the places where an artist works shape what is produced, in what ways the space in which a work of art is exhibited and how it is named influence what is seen or not seen, and how calling attention to certain details in a visual work such as a gesture, a color, or an icon can change the meaning assigned to work as a whole. Table of Contents - Introduction - NYU Catalog

Impossible Images: "Freshly innovative and insightful. For anyone following the unexpectedly audacious artistic responses to the Holocaust by a generation born only into its memory, this volume provides a deep look into works by a diverse group of artists and composers as they struggle profoundly with issues of 'belated memory,' representability, decorum, high and low art. All lead us to question again the role art plays in our memory of this time, how through this art we remember events like the Holocaust we never knew directly."
James E. Young, author, At Memory's Edge and The Texture of Memory 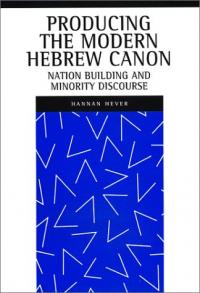 The sixth volume in the series, Producing the Modern Hebrew Canon: Nation Building and Minority Discourse, by Hebrew University professor Hannan Hever, offers a sweeping view of the entirety of modern Hebrew literature, shedding light on the moments of rupture and reversal that have undermined the efforts to construct a hegemonic Zionist narrative. It provides a model for understanding the relations between minority and majority voices in postcolonial situations, showing these processes working and changing over time, from the earliest days of the creation of a Zionist sensibility for literature to Israeli state culture and the discourses or Arab otherness. By illuminating both the process of the canon formation as well as the voices excluded from the canon, Producing the Modern Hebrew Canon offers a powerful alternative reading of twentieth-century Hebrew fiction.

Producing the Modern Hebrew Canon:"This book not only offers a brilliant, insightful, and unsettling contemplation on the role of literary canonization and minority discourse in the construction of national imagination, but, above all, an appositional voice whose critical stance is bound to inform all the work of a new generation of Hebrew scholars."
Anton Shammas, University of Michigan 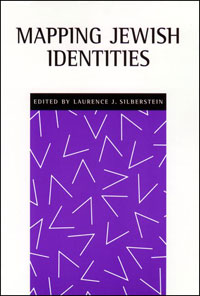 What actually is being examined when we attempt to assess "Jewish identity" or any identity? Most tend to assume that identity is a pre-existing, relatively fixed frame of reference reflecting shared cultural and historical experiences. Drawing on recent work in such fields as cultural studies, poststructuralist theory, postmodern philosophy, and feminist theory, Mapping Jewish Identities, edited by Larry Silverstein, challenges this premise.

Contesting conventional approaches to Jewish identity, contributors argue that Jewish identity should be conceptualized as a continuous process of "becoming" in the context of changing cultural and social conditions rather than as a stable defining body of traits. These thoughtful and provocative essays invite a rethinking of the concepts of Jewish culture and identity.

The contributors to Interpreting Judaism in a Postmodern Age, edited by Steven Kepnes, shed new light on the central texts and issues of Judaism through their postmodern interpretations. They offer provocative perspectives on Bible and Midrash, Talmud and Halakhah, Kabbalah, Zionism, the Holocaust, feminism, literature, pedagogy, and liturgy.

The Other in Jewish Thought and History: Constructions of Jewish Culture and Identity, edited by Robert Cohn and Larry Silberstein, explores the ways in which Jews have traditionally defined other groups and, in turn, themselves. In every society, conceptions of otherness, which often reflect a group's fears and vulnerabilities, result in deep-rooted traditions of inclusion and exclusion that permeate the culture's literature, religion, and politics.The contributors to this volume, a distinguished international group of scholars, explore the discursive processes through which Jewish identity and culture have been constructed, disseminated, and perpetuated. Cultural boundaries and group identity are often forged in relation to the Other.

In New Perspectives on Israeli History: The Early Years of the State, a distinguished group of international scholars draws from history, folklore, political anthropology, historiography, and cultural criticism to reexamine critical issues surrounding the birth of Israel. The authors explore such issues as the transition from yishuv to state, early state policy toward the Arab minority, the origins of the Palestinian refugee problem, the conflict over myths and symbols in the early state, early attitudes toward Holocaust victims and survivors, Arab historiography of the 1948 war, Israel-Diaspora relations, and the shaping of Israeli foreign policy. Edited by Larry Silberstein, New Perspectives on Israeli History includes chapters by Benny Morris, Jehuda Reinharz, Anton Shammas, Kenneth Stein, and Yael Zerubavel among others.

The Archaeology of Israel: Constructing the Past, Interpreting the Present, edited by David Small and Neil Asher Silberman, represents an overview of the state of archaeology in Irael. With contributions from leading scholars of archaeology in ancient Israel, the essays focus on problems and cutting-edge issues, ranging from review of ongoing excavations to new analytical approaches. Of interest not only to archaeologists, but social historians as well, the topics include archaeology and social history, archaeology and ethnicity, and issues relating to combining texts and archaeology in the reconstruction of ancient Israel. The volume was published by Sheffield Academic Press (Continuum) in 1997 and is part of its Journal for the Study of the Old Testmanent Supplement Series.