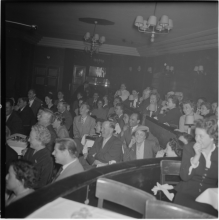 Monday, October 18, 2021 - 4:30pm to Tuesday, October 19, 2021 - 5:00pm
Location: Williams Hall, Herbert A. Roemmele '53 Global Commons
Department of Religion Studies with the Berman Center
ALICE ECKARDT VISITING SCHOLAR IN RESIDENCE
presents
RELIGIONS IN THE PLURAL: CRITICAL CONVERSATIONS ACROSS DIFFERENCE
Monday, October 18, 2021 | 4:30 p.m.
Williams Hall, Herbert A. Roemmele '53 Global Commons
Plenary Address
INTERFAITH DIALOGUE PAST AND PRESENT:
CHALLENGES FOR THE FUTURE
DR. SUSANNAH HESCHEL
THE 2021 ALICE ECKARDT VISITING SCHOLAR IN RESIDENCE
Heschel’s lecture will examine the history of the interfaith dialogue that began to develop in late eighteenth-century Germany. It will focus on the history of Christian-Jewish relations in the modern era, with attention to Islam and Buddhism, religions that played only a minimal role in the actual dialogue, but important roles in the imagination of the participants. The lecture will place interfaith dialogue in the context of the rise of European imperialism and argue that Christian supersessionism is a form of theological colonialism. Heschel will look at three key moments of the twentieth century: Ernst Troeltsch’s 1915 attack on Hermann Cohen; Protestant efforts to dejudaize Christianity during the Third Reich; and the revolutionary Catholic affirmation of other religions, Nostra Aetate, issued during the Second Vatican Council. Heschel will examine those events as responses to European political decolonization and ask how they might illuminate the rise in recent years of radical right-wing, neo-Nazi and fascist, white supremacist movements. Finally, the lecture will ask what we should place on the agenda of twenty-first century interfaith dialogue – if we want it to continue.
SUSANNAH HESCHEL is the Eli M. Black Distinguished Professor of Jewish Studies at Dartmouth College. Her scholarship focuses on Jewish and Protestant thought during the 19th and 20th centuries, including the history of biblical scholarship, Jewish scholarship on Islam, and the history of anti-Semitism.
Tuesday, October 19, 2021 | 9:00 a.m. to 5:00 p.m.
Williams Hall, Herbert A. Roemmele '53 Global Commons
PANEL DISCUSSIONS
REPRESENTATION – DISCRIMINATION – AFFILIATION – COMMUNICATION
RELIGIONS IN THE PLURAL: CRITICAL CONVERSATIONS ACROSS DIFFERENCE
In memory of Lehigh Professor Alice Eckardt's work on interreligious conversations, this gathering will explore the current state of scholarship on the borders of how diverse religious actors encounter one another. How has the study of interfaith endeavors changed as it moved from a model focusing primarily on Christian-Jewish interactions to one encompassing a wider range of traditions? How are the very concepts of religion and social identity produced in these interactions--and how are they studied?
REPRESENTATION - 9:15 a.m. to 10:30 a.m.
Panelists: Jessica Cooperman (Muhlenberg College) and Annabella Pitkin (Lehigh University)
DISCRIMINATION - 10:45 a.m. to 12:00 p.m.
Panelists: Sonja Thomas (Colby College) and Jodi Eichler-Levine (Lehigh University)
AFFILIATION - 1:30 p.m. to 2:45 p.m.
Panelists: William Gruen (Muhlenberg College) and Khurram Hussain (Lehigh University)
COMMUNICATION - 3:00 p.m. to 4:15 p.m.
Panelists: Brett Hendrickson (Lafayette University) and Benjamin Wright (Lehigh University)
ALL TALKS OPEN TO THE PUBLIC. FREE OF CHARGE.
The annual Eckardt Scholar In Residence honors the life and memory of Alice L. Eckardt, B.A., M.A., L.H.D., Professor Emerita of Lehigh University, Bethlehem, PA, where she taught in the Religion Studies Department from 1972-1987.
For more information, call 610-758-3353