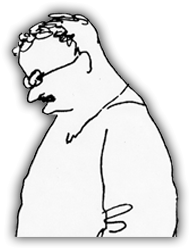 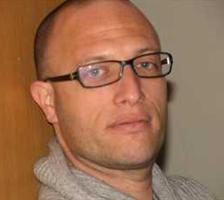 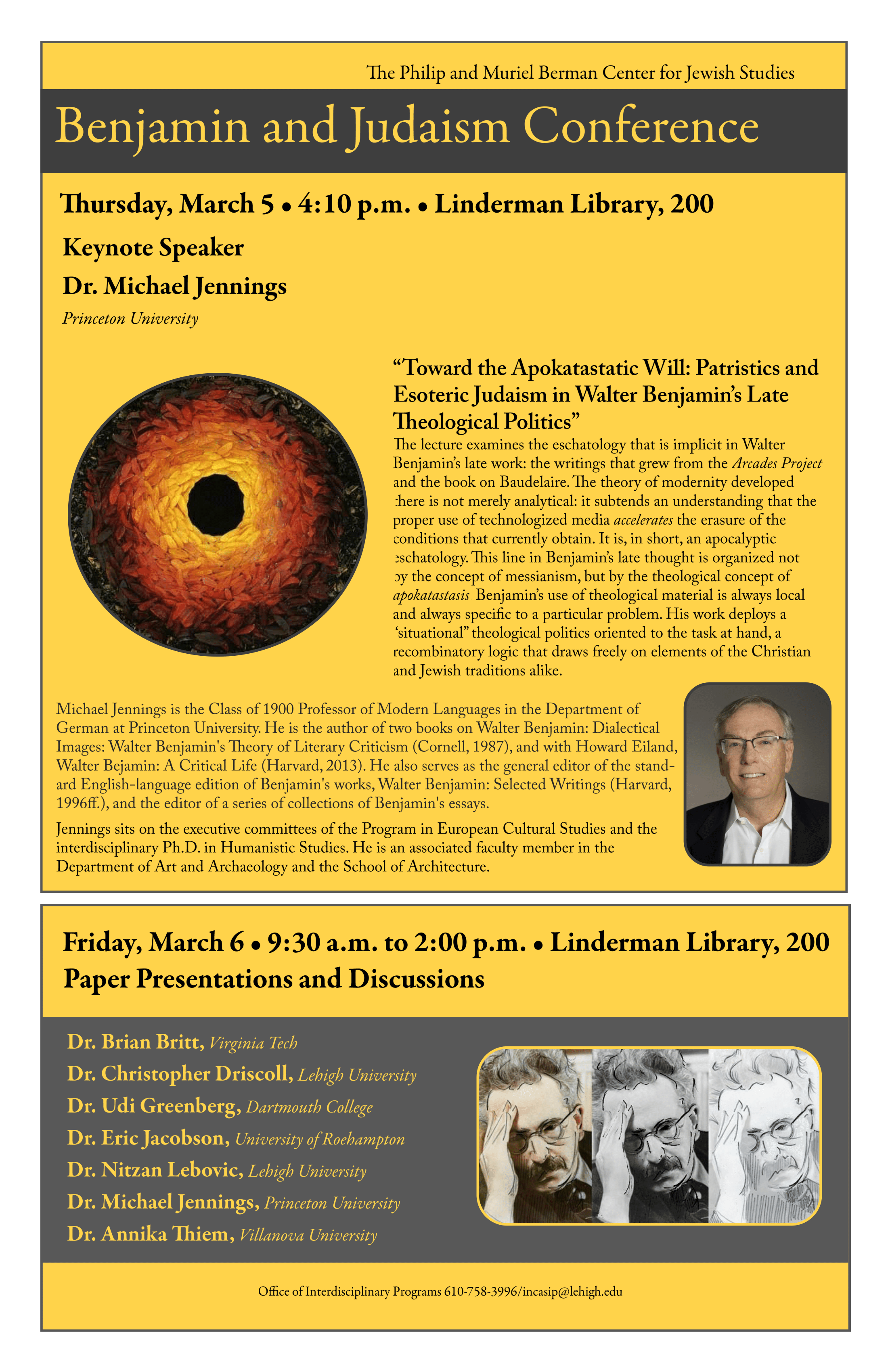 The lecture examines the eschatology that is implicit in Walter Benjamin’s late work: the writings that grew from the Arcades Project and the book on Baudelaire. The theory of modernity developed there is not merely analytical: it subtends an understanding that the proper use of technologized media accelerates the erasure of the conditions that currently obtain. It is, in short, an apocalyptic eschatology. This line in Benjamin’s late thought is organized not by the concept of messianism, but by the theological concept of apokatastasis. Benjamin’s use of theological material is always local and always specific to a particular problem. His work deploys a “situational” theological politics oriented to the task at hand, a recombinatory logic that draws freely on elements of the Christian and Jewish traditions alike.

Michael Jennings is the Class of 1900 Professor of Modern Languages in the Department of German at Princeton University. He is the author of two books on Walter Benjamin: Dialectical Images: Walter Benjamin's Theory of Literary Criticism (Cornell, 1987), and with Howard Eiland, Walter Bejamin: A Critical Life (Harvard, 2013). He also serves as the general editor of the standard English-language edition of Benjamin's works, Walter Benjamin: Selected Writings (Harvard, 1996ff.), and the editor of a series of collections of Benjamin's essays. Jennings sits on the executive committees of the Program in European Cultural Studies and the interdisciplinary Ph.D. in Humanistic Studies. He is an associated faculty member in the Department of Art and Archaeology and the School of Architecture.

An interdisciplinary group of scholars, writers, artists and cultural critics examined the far-reaching changes in the definition, interpretation, and imagining of diaspora as reflected in contemporary Jewish art, literature, and scholarship. Employing diaspora as a critical tool, conference participants came together to re-examine and re-imagine Jewish history and explore alternative ways of thinking about Jewish group identity and culture.

The symposium brought together an outstanding group of Jewish writers, who reflected on the contribution of contemporary Jewish writing to reshaping our understanding of Jewish identity, the geography of Jewish life, Jewish communal memory, and the boundaries of Jewish culture. Sessions were devoted to “Thinking and Rethinking the Holocaust,” “Multicultural Jews,” and “Rethinking Jewish Identity.”

Part of the Year 2000 "Holocaust Project" sponsored by the Berman Center Volume: Impossible Images: Contemporary Art after the Holocaust (2003)

In the first conference of its kind, a distinguished gathering of artists, photographers, curators, cultural critics, and historians analyzed the ways in which the Holocaust is represented in and through art, photographs, museums, and monuments. Specialists from the United States, Great Britain, the Netherlands, and Israel addressed such questions as: How is memory and awareness of the Holocaust being transmitted and produced through representational practices and cultural forms? What diverse forms of representational practices are being used to represent the Holocaust? What representational strategies are evident in the Holocaust museums and memorials? Who are the intended audiences and what are the projected outcomes for these museums and memorials?

The conference presentations explored the ways in which theories drawn from such fields as cultural studies, gender studies, and postcolonial studies both clarify and problematize the processes through which Jewish identities are constructed. A particular concern of the conference was to explore alternative theoretical approaches to Jewish identity in light of the far-reaching social and cultural changes that contemporary Jews are experiencing in their everyday lives. Seventeen American and Israeli scholars took part in the three-day program. Among the questions addressed were: What are the processes of identification by means of which contemporary Jews construct their identities? How do contemporary Jews construct their identities? How are power and power relations implicated in these? What are the practices of inclusion/exclusion involved in these processes of identity construction? In what ways is difference inscribed in them?

“The Archaeology of Israel: Constructing the Past/Interpreting the Present” (1994)

Volume: The Archaeology of Israel: Constructing the Past, Interpreting the Present (1997)

The conference brought together an international group of specialists in history, gender studies, biblical studies, political ideology, materials science, and the theory and practice of archaeological research. The gathering was conceived as an opportunity for a cooperative effort between two institutions that share the name of and were funded through the generosity of Philip and Muriel Berman–the Berman Center for Jewish Studies at Lehigh University and the Berman Center for Biblical Archaeology at the Hebrew University of Jerusalem. The opening session of the conference highlighted the work of the faculty of the Jerusalem Berman Center with presentations by its faculty Amnon Ben-Tor, Trude Dothan, Amihai Mazar and Ephraim Stern. One of the goals of the conference was to view archaeology through lenses shaped by the critical perspectives of the humanities and social sciences. A major assumption informing the activities of the Berman Center is that all scholars, including archaeologists, engage in a creative, constructive endeavor. Thus, they do not simply encounter a world that passively awaits their inquiring minds. Through their questions and the modes of analysis and interpretation that they employ, scholars participate in the construction of the very world that they are studying. As the subtitle of the conference indicates, in the process of constructing the past, archaeologists, intentionally or unintentionally, also interpret the present.

Volume: The Other in Jewish Thought and History: Constructions of Jewish Culture and Identity (1994)

A distinguished international group of scholars from the United States and Israel explored the categories, descriptions, and images by means of which Jews have defined other groups and, simultaneously, themselves. It has been increasingly recognized in fields such as anthropology, social thought, and literary theory that groups forge their own cultural boundaries and establish their identities through their definition of “other.” Such conceptions of otherness, which often reflect a group’s fears and vulnerabilities, also generate and support discourses of inclusion and exclusion. Bringing together scholars from a variety of disciplines to explore these issues in relation to Jewish thought and history, the conference aimed to enhance our understanding of the processes through which Jewish identity, culture, and ideology have been constructed, legitimated, and disseminated.

“New Perspectives on Israeli History: The Early Years of the State” (1990)

Volume: New Perspectives on Israeli History: The Early Years of the State (1991)

This conference was constructed against the background of a growing debate among scholars concerning the early years of the State of Israel. In the wake of the opening of previously closed archival sources, several works were published that challenged prevailing interpretations of such issues as the origin of the Arab refugee problem, Israel’s readiness to enter into peace negotiations, and the respective military strength of Israel and the Arab nations. These works, written by those whom Benny Morris labeled the “new historians,” elicited sharp criticism from many Israeli historians and aroused considerable controversy in that country. By examining a number of the issues raised by these historians, the conference tried to foster an understanding of the problems and decisions faced by Israel in its transition to statehood.

“Fundamentalism as a Political Force in the Middle East” (1989)

Volume: Jewish Fundamentalism in Comparative Perspective: Religion, Ideology, and the Crisis of Modernity (1993) The conference sought to explicate the meaning of the term fundamentalism and to differentiate it from mainstream religious traditionalism. Speakers addressed the ways in which Jewish and Islamic religious movements, with their fusion of theology and politics, influenced the evolution of the Arab-Israeli conflict. The conference was the culmination of the Center’s semester-long project on fundamentalism in a global, interdisciplinary perspective, which analyzed the phenomenon of religious fundamentalism in the context of modern culture and society.